There’s a history to the place we live. It was bought by Cody’s aunt Verna Limbaugh from her father Wayne Limbaugh, and Wayne bought it from his father-in-law, Percy Haverfield. Few things from the original property remain; a chicken coop above a 10-acre field that was once a peach orchard, harvested for hay, and later a home to horses and cattle, and a brooder shed above our house that now stores tools. Everywhere you look had been something else at a time. Out the window now, I can see the lot where the childhood home of my husband’s father once stood. It was unwittingly built on a spring that eventually relocated them to where we live now. 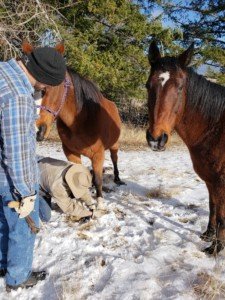 The ranch has been home to so many and so far we’ve carved out a space for them in our house – the family photo wall. It’s the only wall that isn’t painted white. We painted it chrome green (that will eventually cover the whole great room!) patterned with golden framed photos of both mine and Cody’s families, honoring their time here and welcoming them back home. The door here is always open.

As I’ve illustrated before, we can’t plan on making money here the same way the generations before had (we have other things in mind!) They did so much by way of caring for their families with the diverse resources they had here, and we like to think we might do so in newer and inventive ways. One of which would be Haverfield Hall. Named after Cody’s great grandfather Percy, we dream of a new building where the old barn once stood, to host our growing family and even families that are not our own.

Think of a great hall with the aesthetic of a barn and the function of an event space. I picture a long table down the middle, a stage, rustic chandeliers, and a heavy set fireplace. Timber framing, antiqued equipment, local art, and heavy fabrics.

Cody’s family hosts a reunion every few years, and we’d like to have room for all the out of towners, so we’ve been thinking about outfitting apartments upstairs! My family regularly gets together for Thanksgiving and Passover each year, and we’ve been dying to invite them all out here to see the magic of the place. We want to host them well, give them an experience, and feed them all that we have to offer.

We got to thinking about a smokehouse the other day – supposedly it’s a simple project. We’d be able to then smoke our own meat, preserve the fish that we’ll be stocking the pond with, and get us further away from being reliant on grocery stores. I’ve been dreaming of a commercial kitchen. We could preserve our harvests on a larger scale, host workshops, and feed large groups of people (there are a lot of Limbaughs!). This summer we had an entire weekend dedicated just to harvesting and preserving our apples – we only used half of what was on the tree, and we are anticipating needing more space when the rest of our orchard matures.

In hopes to diversify our income out here, we plan to develop rentals and retreats. We have an apartment space on the lower level of our house, a teepee for glamping, and aspirations to build tiny-like homes that we want to sprinkle about the mountain. We want the ranch to be a destination (even more so than it already is)! We want to extend our goods to our community and sell them to the local farmer’s markets and restaurants, using this time to solidify my skills in preserving, cooking, and baking.

Ever since we moved here last March, since the shutdowns and in’s and all, cooking has given me an outlet. I have loved to cook since I was in high school when I was first introduced to eating paleo style, but college dorms and expensive apartments in Portland never lent to large kitchens that inspired putting in the hours. I have an amazing kitchen here – counter space, inherited cast iron sets, and a stocked pantry with at least a year’s worth of flour!

Other than ranch work, I haven’t been doing much that has really fulfilled me. Learning to play the cello and working out have exercised my brain and body, but cooking challenges my creativity, my skill acquisition, and I get to feed people. Few things outside of my ten-year coaching career encompass all of those elements. It resonates with my frequency -my need to keep moving and questioning- and I often find myself in the zone. It holds my attention all while having fun (music on, or even an episode of Chopped in the background!), sort of in the same way weightlifting had. I had seriously considered going to culinary school when we moved here, but due to covid restrictions and our location, it isn’t an obvious option right now. But if there’s anything I’ve learned from getting my undergraduate degree, it’s that there’s so much to be learned outside the walls of a school that won’t break the bank. As someone who is still paying off student loans, I’m often wary of spendy promises of education. There are so many avenues to consider and Haverfield Hall would be giving my internal calling a physical space. 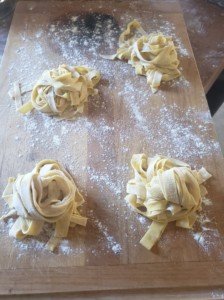 Looking out the window just now, we are blanketed in snow, and the spring projects are closer to having just wound down as they are ramping back up. For now, the focus is dreaming up the process (get it on the vision board!) and giving the concept a backbone – practicing hunting, growing, foraging, preserving, cooking, and baking.  We want to be a part of every step of the process here, and even the building itself will be constructed out of our own lumber that we will cut and mill ourselves!

Though we’re approaching this land with new eyes, ideas, technologies, and intentions, we do it all in honor of the people who previously paved the way.