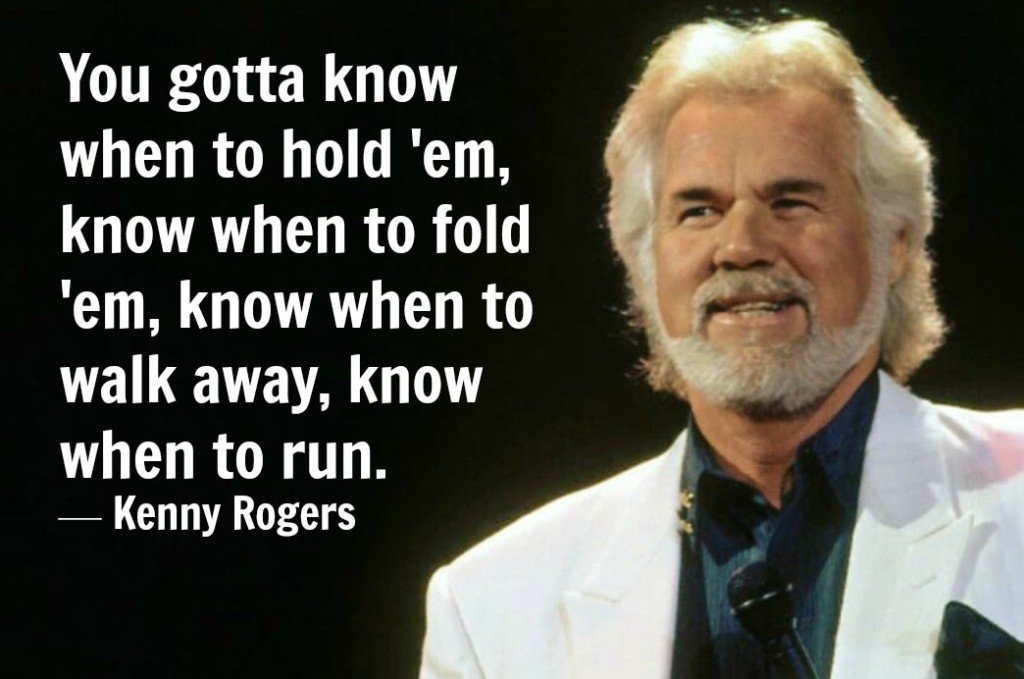 This is the trickiest lesson I’ve yet to learn.

People seem to want to invent new words to say the same things, but I got the message a long time ago. Sometimes overcoming obstacles or achieving anything requires a stubborn commitment to never giving up. But I wish I could find someone good at teaching us when to quit.

This seems to be the skill that nobody wants to talk about. We’re taught that determination is a good trait, and quitting is for losers. We have plenty of examples of champions who had every good reason to quit but never did. But what about all the good examples of people who quit, and then went on to live better lives as a result?

Should you stay with a job that’s uninspiring?
Should you finish the degree just because you’ve already invested so much?
Do you stay in the dysfunctional relationship?
Do you stick with the failing business?
Going down with the ship?

Those questions seem easy to answer until you’re the one in the situation.

I was a banker for 5 years, hoping it would lead to better things before illness finally gave me an out.
I tried many iterations of my fitness business but failed to really make a success of it for 17 years.
I was with my first wife for 25 years before I decided I could no longer live with alcoholism.

In every case, quitting was the better decision.

Should I have quit sooner? That’s irrelevant when it concerns those choices I’ve already made. But what about future quitting? How can we improve the skill of knowing when to quit?

I try to offer as many solutions in my writing as I can. But this article is simply a question. It’s a question that most of us deal with internally but we’re afraid to consult anyone about it because quitting is for losers. We don’t want to appear to be weak. We’ve been taught that determination is a virtue. But what if it’s not a moral question at all?

Can we look at grit and quit with equal weight and value?

Can we learn to use both as tools when appropriate? If we let go of the moral virtue view of grit, and let go of the false narrative that you’re either a quitter or a winner, perhaps we could learn to make better (or at least faster) decisions about quitting.

Honestly, both books were of a similar vein to this article. They ask you to stop and consider the question of quitting, but neither offers much in the form of concrete actions to practice.

I’ve come to recognize certain cognitive biases such as the sunk-cost fallacy. And I know that what often stops us from quitting is fear. We fear the consequences of quitting. We fear the loss. We fear what our value or reputation will be to others if we quit. Sometimes we simply fear the unknown (the devil you know is better than the devil you don’t).

I’m not sure that recognizing these mental blocks does much for us in the moment. We can recognize them in other people and in our past-selves. But when faced with the decision to stick to it or bail, it’s of little use trying to logic your way out of fear. It’s my experience and belief that the only way to diminish fear is through action. Unfortunately, that puts us right back to where we started.

I came across a really interesting question a while back. I’m not sure where so I’ll have to paraphrase…

How is the thing you’re wanting to quit serving you now?

This question really made me stop and think. Oftentimes the bad habits or situations we want to change are actually serving us somehow. That’s why they can be so tough to abandon. The job you hate offers you money to use and status to show. The substance abuse actually provides comfort or freedom from pain, even if temporary. The bad relationship may be preferable to loneliness.

Sometimes, we could even be quitting things that are actually good because quitting makes room for something even better. Grit can produce opportunity costs. Saving your money with a 2% compounding interest rate is good. But you’re losing money if you could move it to a mutual fund bringing 5%, or real estate investing that returns 30% per deal.

My examples may be real, but they’re too obvious. The real dilemmas are often so muddy we can’t even recognize them until we have the apparent clarity of hind-sight.

I’d like to have some better tools for quitting. For now, I’d consider it an improvement if we could simply view quitting as an equally valued tool next to grit. Perhaps we could even begin to recognize that part of grit is knowing when to quit.

I would be interested in hearing your chapter in this story.

Can you tell me about a time when you reluctantly quit but later realized it was a great decision?
Do you have tools you use to help determine when it’s best to quit?
Are you struggling with the decision to quit right now?