Since the quarantine began, I’ve been reconnecting with people from lives past and catching up over social media messaging. Though I’ve contemplated deleting my social media (many times for many reasons), I was compelled to document our move from Portland out to the Limbaugh ranch in the mountains. So many people awesomely came out of the woodwork – those with who I just traded likes became new messages and REAL exchanges!

The more different my life began to look in pictures from what it once was in Portland (beautiful homes in the west hills, weightlifting videos, and high-heeled moments!), the more I heard from people who knew me as a city girl through the ages.

“I’m so glad you’re getting to live the simple life!” they’d say… 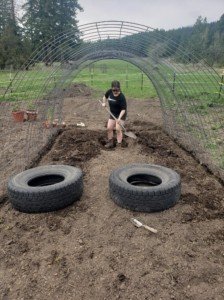 My mailbox is a 20-minute walk from my house one way. Heating the house requires knowing how to build a fire and maintain it with wood and proper ventilation. Every task requires sharpening, fueling up, hitching, towing, packing, or measuring (twice!) beforehand…

This land has been in Cody’s family for four generations now. His father, grandfather, and great grandfather all had jobs while they lived here. They sure had a leg up with all the building, gardening, and logging know-how as Cody and I find ourselves behind the eightball learning as we go – often the hard way. Nothing they had a hand in was simple.

When I hear stories of the old days, I wonder what it was like to bathe in a basin in front of the fire, what it might have been like to walk down the county road to catch the bus in winter, or to raise all of the meat you’d be eating that year without getting attached to the animals… I’ll bet a lot of that came naturally doing it day after day and season after season – I swear as soon as you’ve acclimated to the demands of the season, it turns on you! 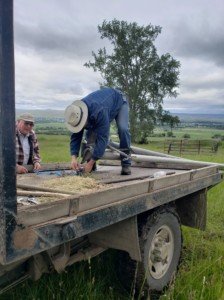 I know there’s a difference between simplicity and ease, and granted that living anywhere rural can mean hard work, but simple? Nah… My life in the city, in my opinion, was more so. I woke up at the same time every day, knew how much time to give myself to get to work on time, and went to a job where the expectations were clear. I put gas in my car, went to the gym rain or shine, and could carry out an entire year predictably (barring any catastrophes.)

Here, most days’ activities are determined by the weather, the demand of whatever we’re growing in the ground, and slowly building the stamina to do it all. In the summer, working in the heat of the day made me useless. In the winter, as soon as the sun goes down, the body wants to follow along. There’s a delicate balance – that we have yet to figure out – of managing our energy, resources, and projects. We carry out projects based on how much money we have to throw at it, how much light we have left in the day, and how much energy we have left from what came before. Even when we think we’ve set ourselves upright or have the best intentions, the mountain still always wins. 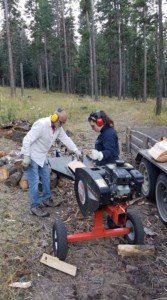 Just the other day we set out to go into the woods and make a dent in our several hundred burn piles and to buck up the last of the firewood we need. We set out with the pick up with the starter oil, a propane weed burner, and the big chainsaw to cut up the rounds. The conditions were seemingly perfect. As soon as we reached the site, a mile away from home, I realized that I wore my hiking boots and a pair of knee-high socks that were neither waterproof nor insulated. Slowly the feeling of being cold became numb and then began to hurt. Building a burn pile isn’t the most athletic of all the chores we do around here, and gathering nearby brush and limbs wasn’t keeping my blood flowing enough to stay useful.

I had to go back to the house and change. I hate looking (or actually being) useless when it comes to ranch projects! So I took the truck back home in the snow, which I had initially dissented to. I was instructed to bring the little chainsaw and some loppers back to keep us busy while the fire got going. I switched into my Swiss Army socks and winter boots and dug out the equipment we needed, additionally grabbing a cup of coffee. I backed out of the driveway to turn up the hill and my tires started sliding. It’s a bunny hill! I’ve seen old blue get stuck on the county road up the mountain, but this was embarrassing. If I couldn’t get this truck up this 20-degree incline then I figured I had a lot to learn about driving in the snow even in four-wheel drive.

I worked at it for 35 minutes. Backing even further down the driveway, revving up slowly as I climbed back up, and little to no progress to show for it. Cody came to drive me out and I remembered that I left my coat behind just as soon as we cleared the slippery spot. UGH. We got back to the site with signs of smoke but no fire. It was wet and colder out now that the sun was going down, and we had been out for over two hours. My job was to do the limbing of the downed trees we found, a job that’d keep me moving and warm even if the fire didn’t take. Comically, the chainsaw wouldn’t start, and keeping warm by the bonfire wasn’t happening. Having had no luck, and now no coat, I served the rest of my time in the pick-up thawing out. By the time the sun went down, we (mostly Cody) sure worked a while and didn’t get much done. I was assured at the end that this won’t be the last time we (again, mostly Cody) would feel this way. 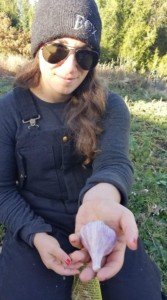 I come from a family that’d likely hire out for jobs like these. I now live day-to-day that I’m quite sure they’ve never attempted. But even out here, if you have the capital or a bunch of kids, the projects would be work. That’s just what they call it too, work. I might have a city gal’s perspective but I’m pretty sure that the people from here wouldn’t claim it to be a simple life. 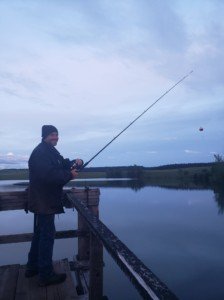 There’s a certain kind of heartache that comes with losing your squash to a cold snap, jamming up the wood splitter, or the sun setting just as you’ve secured an elk, but there’s also the coexistence of pride in the pursuit! As much as you take the fault for mismanagement or missed opportunities, you get directly reap the rewards. There’s no middleman to be tipped, there’s no software, no magic to any of it. I see myself in every step of any given process – my hands have touched every piece. We’ve surely taken advantage of the advancements made since Cody’s great grandfather’s day, but these greenhorns have a lot to learn!

One thought on “Simple Ain’t Easy”