Growing up, I never wanted to have kids. My sister assured me that I would be an auntie to many, and knowing what I put my own parents through, I was skeptical as to why people kept this archaic trend going. Being in romantic relationships, however, would often sway my strong opinions. I’d be able to see our future with child and sincerely desired to create something (or someone) from our love. But between those relationships, I never saw children in my future. 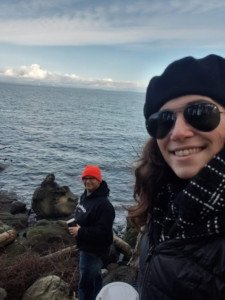 When I imagine myself in my 40’s I see an Anna Wintour-like figure – a madwoman behind a large desk sprawled with art and decisions that were mine for the making. I envision a work-a-holic that doesn’t have time to raise kids, and even still I haven’t yet settled on whether the two could coexist. In more recent years, I developed a knowing of sorts that I would eventually be with a man who already had kids – to have the best of both worlds.

Enter Cody; we met when I was 26 years old and I was living in a studio apartment with my cat and books holding up one end of my couch, and he had three children all over the age of 15. At first, it felt awkward to be with a man whose children were closer to my age than he was, but at the same time, I am so awkward around little kids that I felt rather lucky in this whole prospect. I’ve changed one single diaper in my entire life, and I figured that was plenty for me.

But I had some reservations about my involvement with their father that hit closer to home. When I was 13 years old my mother began dating Ken; a solid, straight-laced, crew cut sort of guy who would later become my stepfather going on eleven years. I gave that man absolute hell. At that age, I doled it out to most adults I encountered – teachers, parents, godparents – but Ken was the new kid on my block and I showed no mercy. I hardly acknowledged his existence. We had years of efforts falling flat, silent car rides, and many a glaring looks. I hated him, I blamed him for everything wrong in my life, and I was ungrateful as hell anytime he did anything for me.

He began as my enemy – he was the reason I moved to Washington just before high school, he became the first priority in my mother’s life – and I villainized him for it. Only once I let him become my friend did he have the chance to grow into a parent.

Faith, Cody’s eldest daughter met me first, and with dread I expected karma to rear its head. I’d never identify as a superstitious person, but I couldn’t see getting out of this one unscathed. My early years with Ken are legendary in our family, and though we have fully recovered, I figured that’s the natural course of a relationship between step-parents and their step-children. But I was wrong. I felt instantly welcomed and adored. We quickly established a routine of meeting for breakfast on Thursdays, declared Hanukkah as our holiday, and clocked in many hours watching Lord of The Rings and Ghibli films.

Ken became my dad, and I introduce him as such, and that was a process that took many years, common enemies, and a lot of discomfort. For now, Cody’s children are my husband’s children. Having had no role in their upbringing, I don’t feel like I have earned the title of stepmother. There was one instance where I was introduced just once as such, and as sweet as it was, it hadn’t fit quite right on me.

But Cody has a bit of a different take on parenting (and most other things!) – he is never the one to tell his kids what to do, they come to him, and they adore him for it. Not only was that an incredibly attractive quality of his, but it set the stage for our family story in a way that is unfamiliar – one to feel out as we go.

I know recreating exactly what I have with Ken is unlikely as he was lucky enough to have lived with me through my formative years. Now that we live on the ranch, the time between our visits with Cody’s children tends to lengthen even more so than when we lived in Portland. But awesomely, all three of them have come out within our first year out here, and I get glimmers of what our relationship might become later down the line. It just takes time, and the more I get with them the more real that prospect becomes. 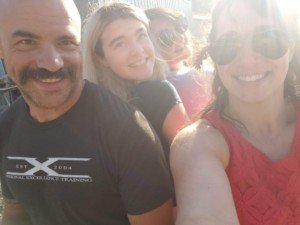 It has been surprising, even to me, how quickly I came to care for his kids. I’ve heard it so many times before, that the love for your spouse translates to their kids… and I can attest that it just does. The love comes with worry of course, as any parent or pseudo-parent would carry and the hardest part of all is knowing what to do with that worry. I realize that my current positioning isn’t one of influence or authority, but I am not without effect to Cody’s parenting his kids. I am always wondering what I am “allowed” to say or deciphering what is my business and a lot of the time it’s scary and messy to even bring up. But nothing about our relationship thus far has been traditional. We welcome it and love that about being together.

I believe the uncertainty is inevitable being the second wife of someone with children, and at times I’ve even thought about reaching out to Ken for wisdom on the matter. But in three short years there have been leaps in my voice, knowing where I stand, and feeling a part of the family, developing my own relationships with Hunter, Faith, and Reagan. Loving Cody so much, I can’t help but want to be a part of it.

5 thoughts on “So I Guess I’m A Stepmother?”